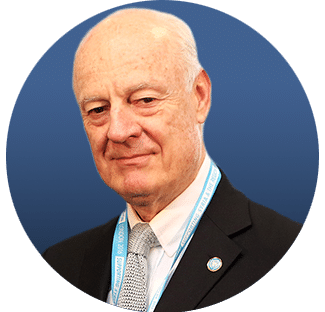 Staffan de Mistura was appointed UN Secretary-General’s Personal Envoy on Western Sahara in October 2021. Previously, he has been UN Special Envoy for Syria from 2014 to 2018 . In 2010, he was appointed Special Representative and Head of the United Nations Assistance Mission in Afghanistan; in 2009, Deputy Executive Director for External Relations of the World Food Programme. Mr. de Mistura served in Iraq as the UN Secretary-General’s Special Representative (2007-2009). He was Personal Representative of the UN Secretary-General of Southern Lebanon (2001-2004). He worked as WFP Project Officer in Sudan for the United Nations and has organized food aid and relief operations in Ethiopia, the Balkans and Rwanda. As an Emergency Relief Officer in Chad he led the first-ever UN airdrop operation. He served in the Food and Agriculture Organization before returning to WFP as Director of Operations in Sudan. He also served as Director of Fundraising and External Relations at the UN Office of the Coordinator for Afghanistan, and has held a variety of posts with UNICEF.