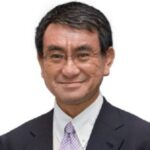 Taro Kono has been Foreign Minister in the Abe Government since August 3, 2017. He is an eight-term Member of the House of Representatives. Among positions he has held are Chairman of the National Public Safety Commission, or Minister in charge of the National Police Organization; Minister for Administrative Reform; Minister for Civil Service Reform; Minister for Regulatory Reform; Minister in Charge of Consumer Affairs and Food Safety; and Minister in Charge of Disaster Management in the Abe Government, Parliamentary Secretary for Public Management and Senior Vice-Minister of Justice in the Koizumi Government, and Chairman of the Standing Committee on Foreign Affairs of the House of Representatives. Taro is a graduate of the School of Foreign Service, Georgetown University.