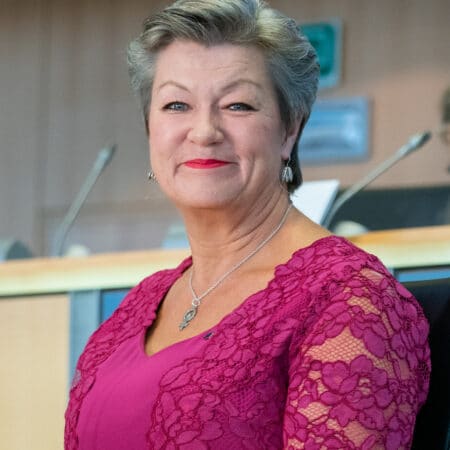 Ylva Julia Margareta Johansson is Swedish politician who has been serving as European Commissioner for Home Affairs since 2019. In early March 2020, Johansson was appointed by President Ursula von der Leyen to serve on a special task force to coordinate the European Union’s response to the COVID-19 pandemic. Johansson worked as a teacher from 1992 to 1994, until Prime Minister Ingvar Carlsson appointed her as Minister for Schools from 1994 to 1998. She then went on to serve as Sweden’s Minister for Welfare and Elderly Healthcare from 2004 to 2006, and as Minister for Employment from 2014 to 2019. She has been a member of the Swedish Riksdag since 2006. Johansson studied at Lund University and the Stockholm Institute of Education 1983-88 and 1991–92 and holds a Master of Science in Education.