News
The Youth Challenge in the MENA Region

The countries of the MENA region are characterised by a large share of the population aged under 30, which comprises between a percentage of about 40% (e.g. the United Arab Emirates) and about 70% (e.g. Yemen). A high number of young people can be an asset or a threat to the stability and economic growth for the states of the region. It can be an asset because young people are, by definition, the most dynamic force of society in times of political or economic changes. It can be an issue because they might feel excluded from the job market or the power share, and they are, therefore, more likely to contest the status quo.

At the current stage, the presence of a high percentage of young people has mostly been an issue for the MENA countries, which are currently struggling with widespread resentment from part of their young population. The main issue is the lack of job opportunities, as the MENA region is the area of the world with the highest youth unemployment rate. While some countries are improving the inclusion of the youth in the job market, others are facing the negative consequences of having a large share of the poorly educated and unskilled labour force. This issue might even become bigger in the upcoming years, as unskilled and poorly educated young people could face greater difficulties in finding jobs without any specific skills in the face of the upcoming technological revolution. Some countries that are suffering from conflicts and institutional instability are even more likely to fail in offering new opportunities for their youth. It worth mentioning that the UNICEF calculates that ‘one in every five children in MENA is not in school, and of these out-of-school children, an estimated number of over 3 million should have been in school if the crises never happened’. Most of them will likely be part of the unskilled labour force in the upcoming years. Another issue is the exclusion in some parts of the MENA region of the youth from the power share, which might lead to an increase of the youth resentment towards the political and economic establishment.

Despite facing the aforementioned issues, the countries of the area could find avenues to benefit from their youth population. Thanks to the decline in mortality and fertility in many countries of the area, a large share of MENA states are currently facing the opportunity to benefit from the so-called demographic dividend, which the United Nations defines as ‘the economic growth potential that can result from shifts in a population’s age structure, mainly when the share of the working-age population (15 to 64) is larger than the non-working-age share of the population (14 and younger, and 65 and older)’. This element can help in boosting growth, providing for investments in the education and vocational sectors. MENA states have the unique chance of investing in the human capital, particularly by fostering the work engagement of young women and facilitating the transition from education to the job market. 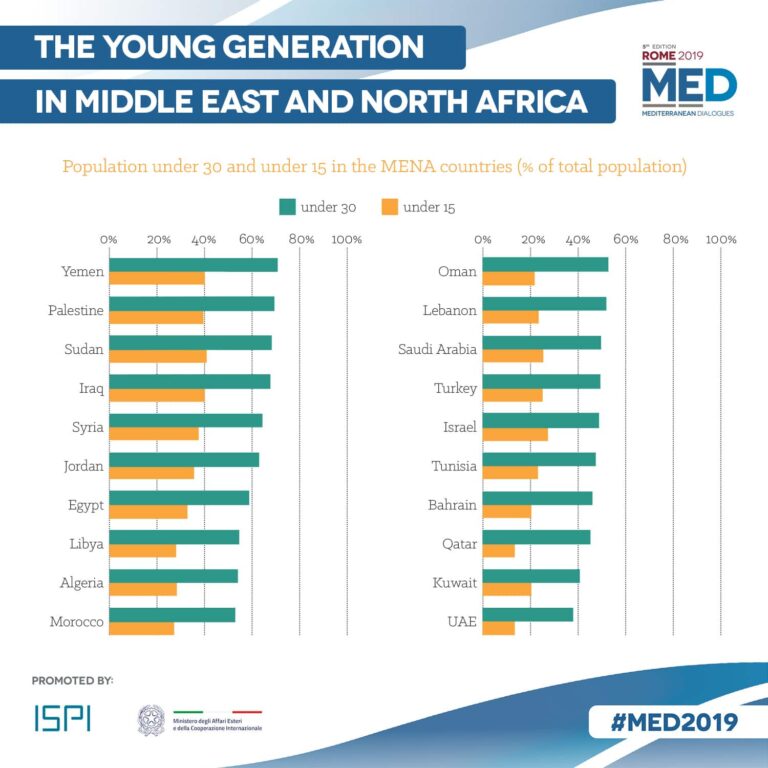